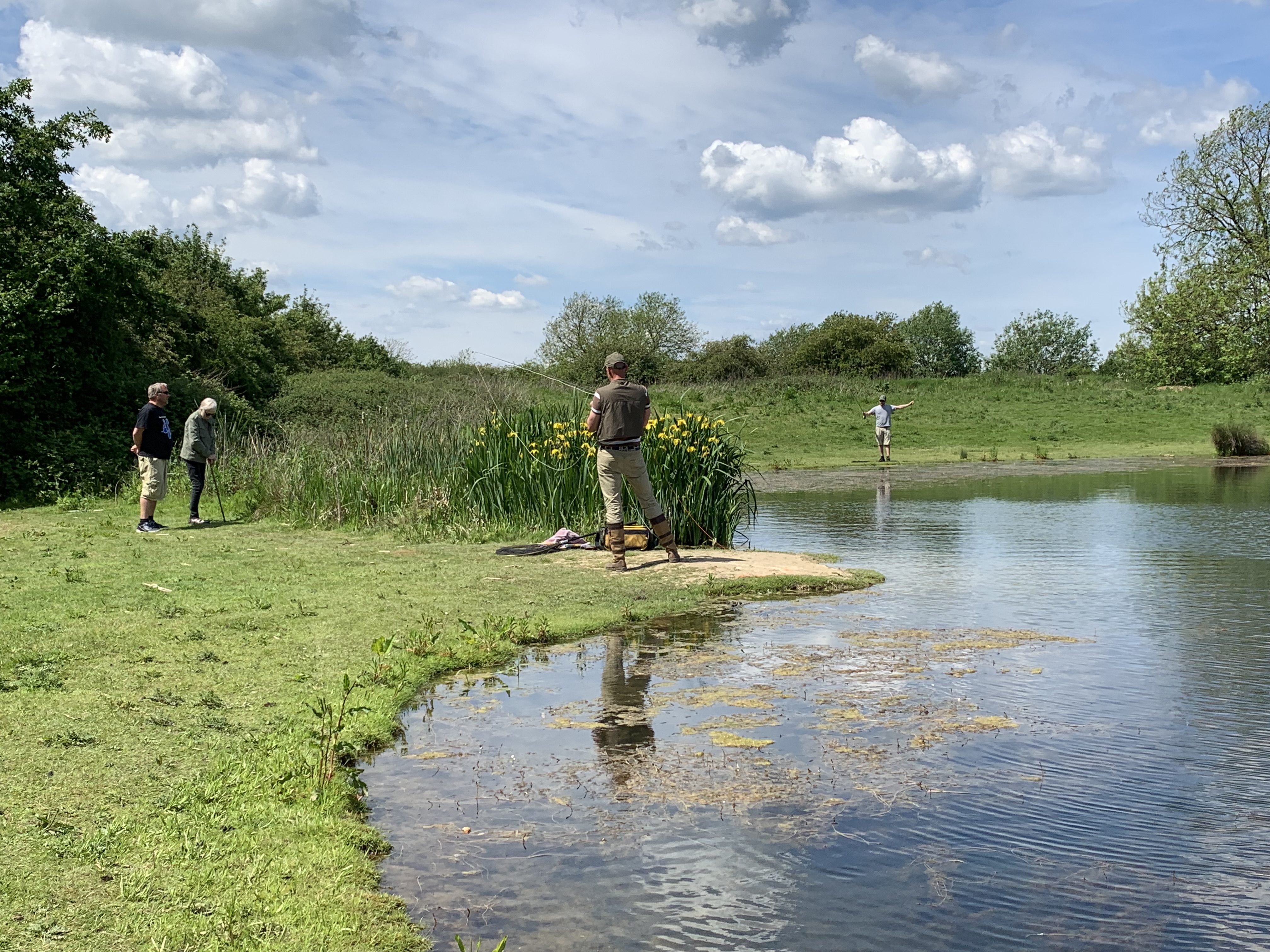 Many moons ago on a far distant planet I once caught an unofficial brown trout record at 22lbs!! The British record then was a long standing  old record at 19lb 6oz , this 22lb cock fish exceeded it by a whopping 2.5lb . Only problem was being my first trout not knowing what it was and promptly gave a big salmon to my mother thinking it a bit special and one for the pot. Forward six months and starting work at Kingsmead Fish Farms /Horton Trout Fishery in Datchet with other gravel pits at Thorpe Park / Wraysbury. Part of the Ready Mixed Concrete fish farming operation, showing the pictures to  work colleagues they nearly fell off the cages as it turned out my salmon was a Brown Trout!! The kype making me think  a salmon as all  hooked jaw fish only salmon! In Anglers Mail later on in 1986 when discovering what it was. 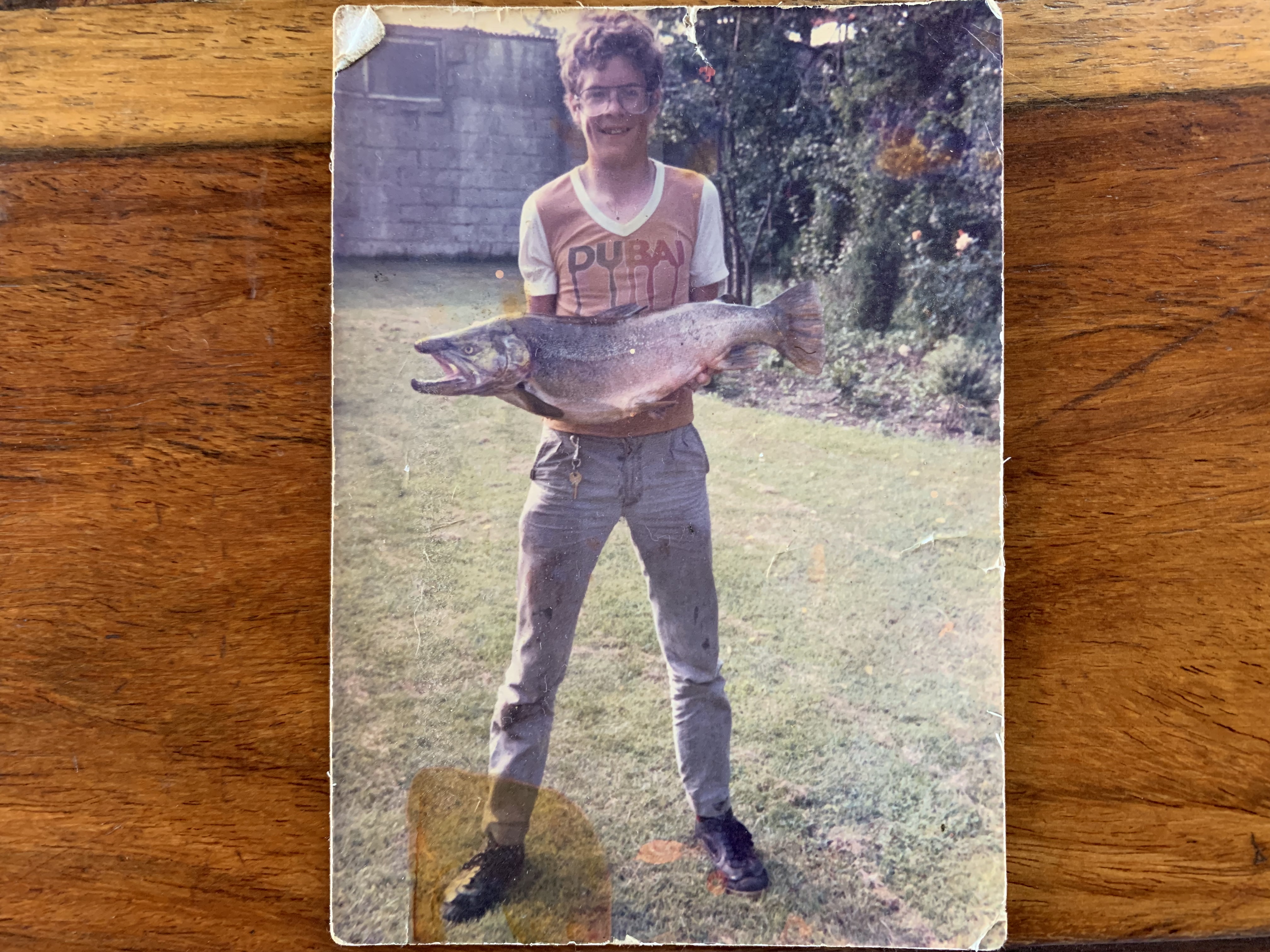 Thirty years later,wanting to stock some 22lb brown trout at the fishery, can it be done ? How long will it be? Many questions in my head . Previously the largest brown stocked here was 18lb and went uncaught for a couple of years but was hooked and seen 3 times and broke people off each time! But 5lbs more is pushing it and a big chunk more…Anyway the process started with 10lb browns put aside 4.5 years ago and grown on in deep fast flowing pools. The result being our latest stocking including a 22lb and a 21lb fish as well as many others earlier who came in ranges from 14lb-18lb -still decent fish. Also mainly proper shaped trout long as well as chunky! These are sure to eat a lot of big rudd, ducklings and voles! 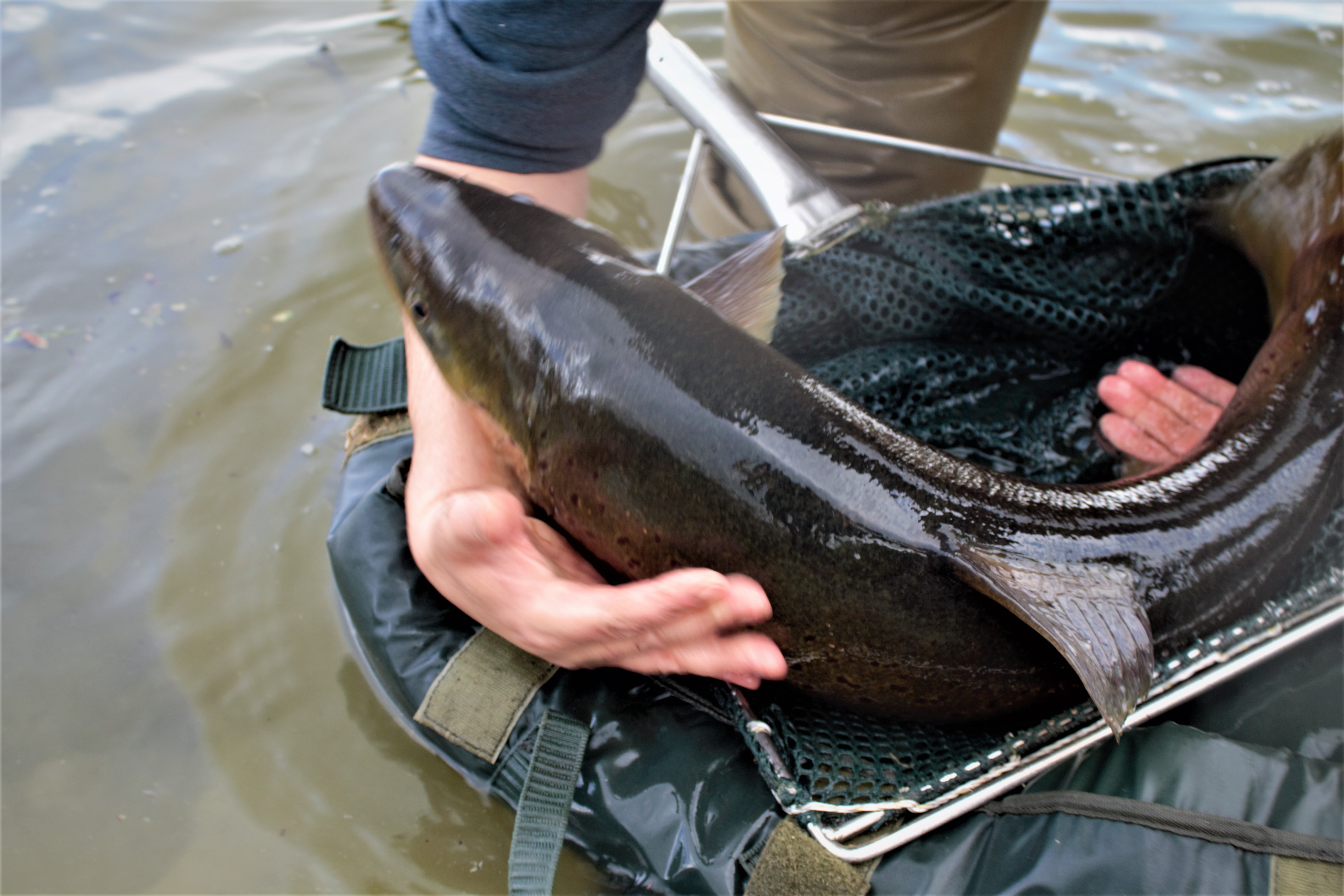 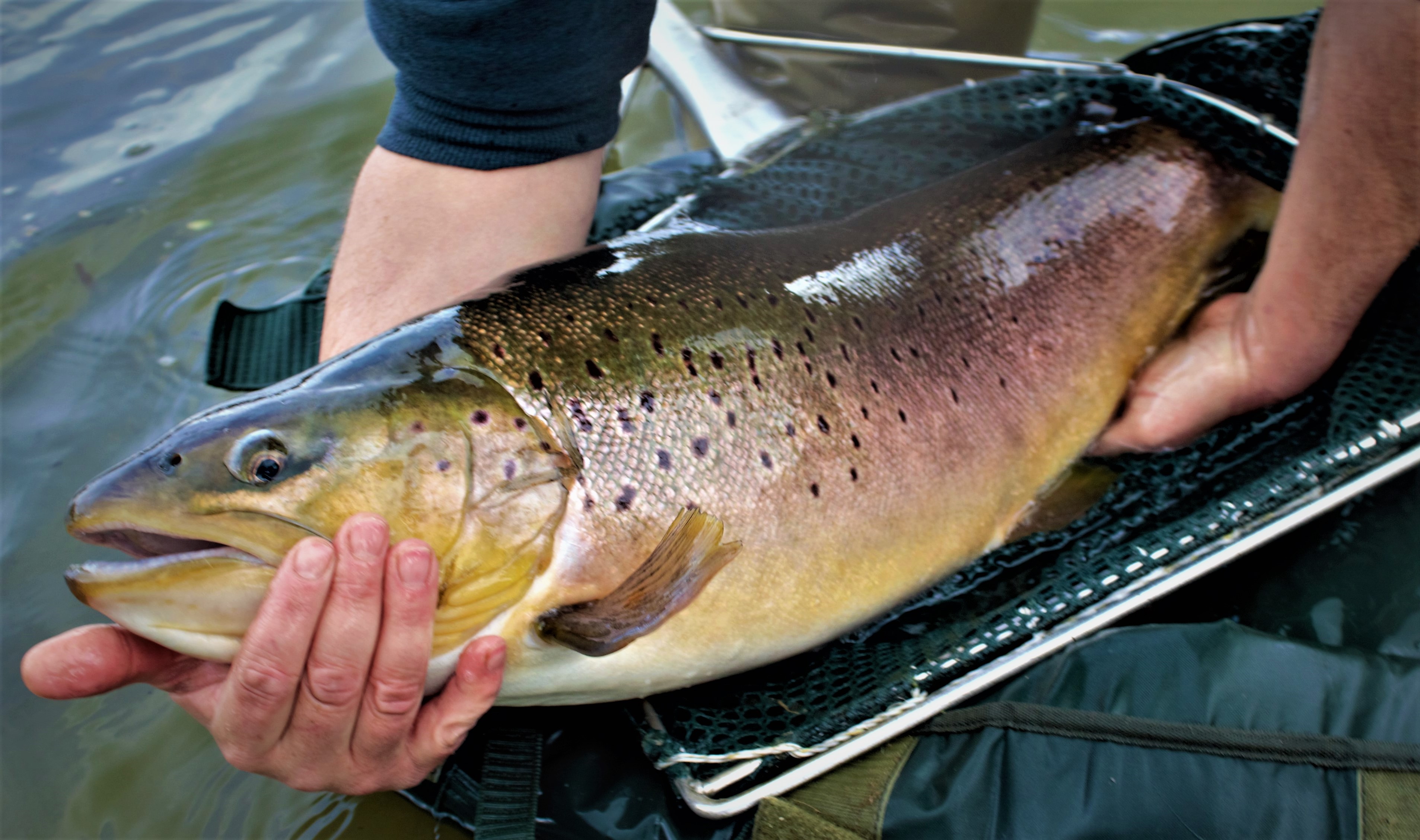 Well the latest fish have been in a month and as the last 18lber showed not the easiest fish to fool, one being hooked and lost but have been seen rolling by a few and amazed people with their sheer size. More snapped lines predicted…

We now have a constant flow of circulating water from Havering Trenches to Three Springs now levels are up, the stock pond is growing on next years big fish and hopefully rearing some double figure tigers, blues and sparctics on site. Also planned for summer fitment is an oxygen generator for air diffusers in each lake which combined with the new flow will make summer fishing  even better than before!

Recently we held our Trout masters fish off for seniors and juniors , both well attended and great fishing, fun and food was had by all. Hats off to Les Plaster who on the day smashed it with buzzers and led by a clear way all day , but all caught fish and at the weigh in were all decent sized rainbows with a few Tigers and Browns released. Interestingly enough now to catch tigers well you have to fish naturals with tiny dries the method- shipmans buzzer, knotted midge , black gnat and cdc the patterns for now. 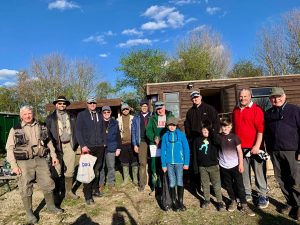 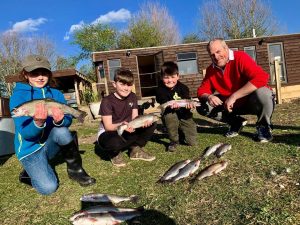 We have restructured the price list and simplified it to read easier ,not too many changes at all,  as all evening /4 hour tickets the same as when we first opened 10 years ago!! No changes at all to our catch and keep Three Springs ticket prices which are cheaper than when we first opened ..Just add £10 to those if want a full day including catch and release on this lake when conditions allow…. Havering Trenches + Three Springs ticket has £2 added to the 1 fish day ticket but that £2 means you can take 1 fish from that lake instead of a small one from Three Springs, the other 2 tickets here for 2 & 3 fish to keep stay the same as when we opened… Stalking Pools Ticket +All Lakes for 1 fish has risen £4 again taking a bigger fish , the 2 fish option stays the same as before. This goes towards the huge feed costs of rearing 20lb plus browns! So really not much added all things considered as we have some big costs in running the fishery , upgrades like the toilet block and ongoing maintenance all costs so we try and keep as low as possible. Remember most tickets include catch and release for a variety  species and sizes! Where else is this possible for these figures??!!

The fishing as of late is very varied depending on lake you fishing and time of day.  Last 3 weeks buzzer fishing and dry fly on Havering Trenches is off the scale. Three Springs is all about marginal fishing with bloodworms and skinny nymphs for  blues and browns catch and release end while catch and keep rainbow end just loving blobs presently. While if fancy the Stalking Pools for the the sparctics you need to be pulling a lure but if big rainbows and browns your aim then static is best .

Another good London Fly Fishing Fair been and gone , good to welcome a few new anglers we met there so thanks to the organisers again. Peter Cockwill was here last week on a feature day for Trout Fisherman so watch out for that soon. Lets hope for a good season and not a heatwave but either way our fishing will still be great due to our latest additions and aiming for a 5lb recorded Rudd this year amongst other targets. More Tigers arriving this month adding to the collection.

Another batch  of the Freshwater Informer been delivered which is in the lodge for you to grab your free copy, always a great read , full of fishy news for all types of fishing. Spring is definitely in full flow with colours again, a green hedge ,the first born waterfowl yesterday so lots and lots new to see each day, the clocks going forward so evening fishing and rises worth witnessing-Hope to see you all soon!