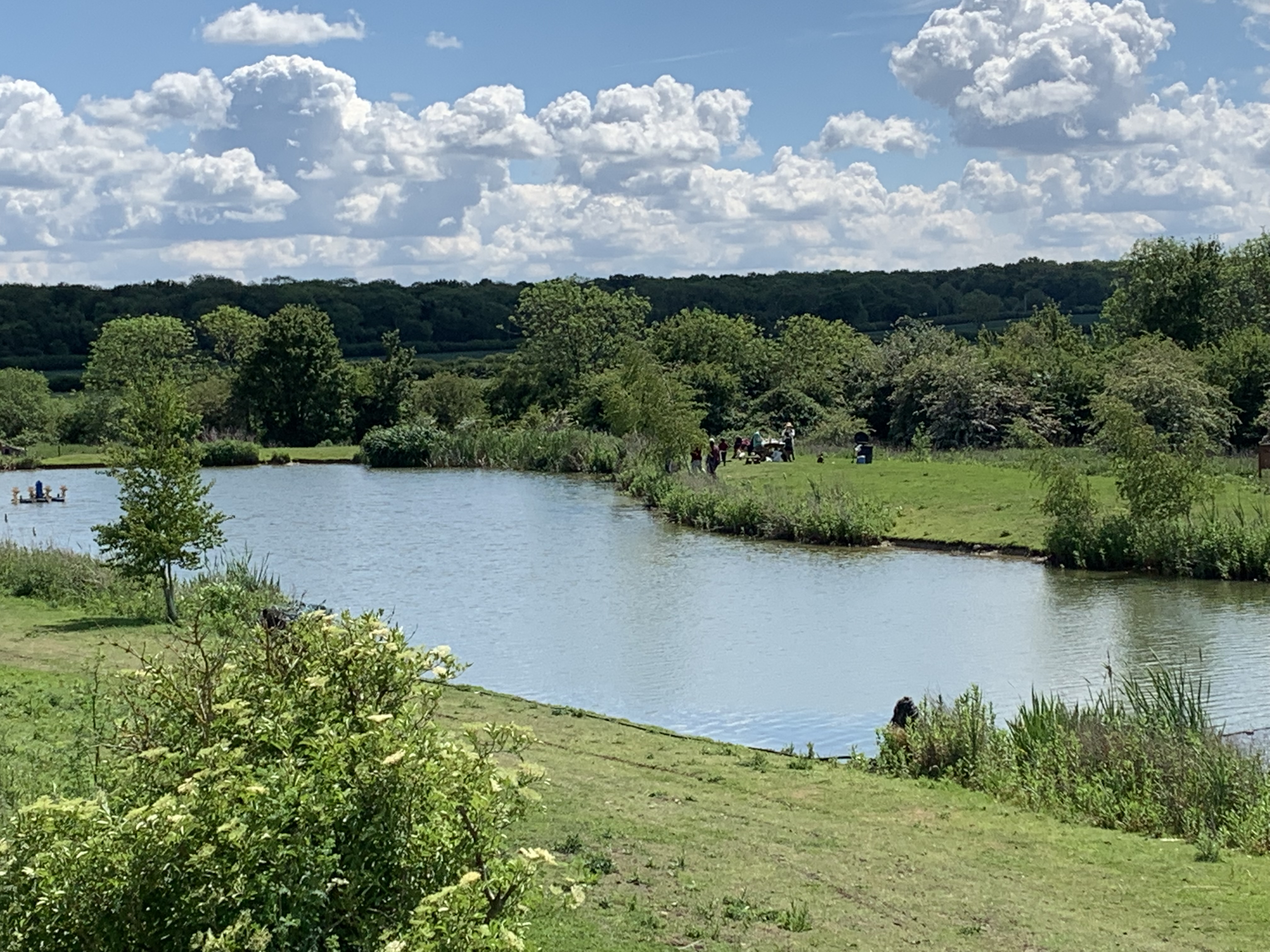 Well as summer draws to a close a few updates on the past and future fishery news . Thanks to Trout Fisherman and Peter Cockwills article in the June addition page 27-31 titled Sheer Quality. A great read and appreciate the title and every time we love to have  Peter and the crew come here as generally always a different time of year with feeding fish behaviour for the master to trick -this time was all about the margins and a static parachute adams to fool the wise by now highly visible tigers. This article bought in a few new faces and reminded some old ones to revisit.

A great stocking programme to ensure a fantastic summer of sport so thanks to Richard at West Acre in Norfolk for an unlimited amount of as ever fin perfect Rainbows and Browns with our 2 largest Browns stocked to date at 22lbs and 21lbs. The biggest browns grown and stocked for a few years in the UK so i have been reliably informed! These 2 fine specimens reside in the Stalking Pools and have been hooked and lost a couple of times….But regularly seen jumping or charging prey. The last biggest Brown we stocked there at 18lbs took a couple of years before being hooked properly and lost at the net after much stalking and planning and rig upgrades to one of our regulars! Remember these fish are big fish heavy heavy leaders to even have a hope! I have seen them eat ducklings, baby moorhens, snakes, voles and of course monster rudd! Another shout out to all the lads at Torre Trout Farm in Somerset who provide us with the stunning Tiger, Sparctics, Blues and Goldens with the Tigers being a favourite of mine as such a pretty fish and here they are super active all summer,  jumping non stop most days taking damsels and dragonflies on the wing midair -great to witness and super sport! See our Youtube channel Thornwood Springs for tigers taking ducklings also!

Another couple of new additions to the lakes was the circulation from the high powered pumps so an in and and out on both big lakes plus the addition of an air generator machine pumping air into 3 giant air diffusers into each lake bed which means more oxygen and dispersal of build up of nasties…How much this has improved fishing is hard to tell as the weather has been so trout fishing friendly this year but some big rainbows have been taken  on the Stalking Pools in summer as normally we stop fishing in the there. Rod averages have been great on Havering Trenches at 7 per rod most of the time dropping to 3 per rod on the last  hottest Bank holiday Monday but 1 angler landed 9 fish that day ,taking 3 for the pot released 6 and had his first double hook up including a  brown! Most days dry fly all day and dry blue damsel the main pattern but hoppers and daddies good also. This August saw 15 brown trout caught and released most being on a dry fly , amazing considering most July/August months i rarely if ever put brown trout in the catch book! Again that machine or temperatures? The Three Springs catch and keep end was busy with families and mainly limit bags!  Check facebook Thornwood Springs for all summer updates and scroll back as  so many pictures to see and stories told..

This summer also saw the much awaited opening of the doors to a very select chosen few to target our specimen Rudd as we all know the size of the Rudd here -its only been allowed in the closed to catch and release section of Three Springs after strict criteria met!  Barbless hooks at all times, unhooking mat, no keep nets and no maggots also a very limited amount of anglers and places need to be booked in advance  to keep the numbers low and pressure on fish for the same reason . Over 350 Rudd over the magic 2lb mark recorded with 5 over 3lb and a good few much bigger lost in the fight or at the net, exciting stuff and i thought the 5lb ones i have seen would have been caught by now but getting through the specimen 2lbers is the problem!!! Who would have thought that to be a problem?!!  But most have all had their personal bests here with best recorded bag of over 20 plus above  2lb in one session for 1 lucky angler, not counting the 50 or so he  that day over 1.5lb -no wonder these guys travelling from Dorset, Hampshire ,Northamptonshire  and even  further afield! Also these Rudd have graced Angling Times and Anglers Mail the last 6 weeks if not every week. Also half of them are occasional fly anglers so have got a few more to the venue this way.

Running a trout fishery is hard work especially over the summer months, with lots to maintain and upkeep, so  those who help and support it, both in the field and in the background are really appreciated both on a customer basis and those who volunteer a helping hand or two.  You all know who you are. A very patient partner is needed by all fishery managers i reckon! So thanks to Renalyn who is crucial to certain aspects  of here..Hopefully her kitchen be finished soon for all to try what the magazine sampled with some of her dishes being ready to try in the next couple of weeks!

So many firsts for so many people this year ,first trout, first tiger ,first fish , first dry fly caught fish , first double, the list goes on and on, so many great memories for all to remember. So many Troutmaster forms filled out this year the fish off should be epic!   Looking forward now Autumn is here and the first  fish delivery  arrive next week on Monday, not that our rod average looks to need it but it will certainly liven the residents up a bit more. Some amazing grown on fish have been in all anglers bags this summer and went on a lot of BBQs for sure. Lets hope to see you soon and join us here or better still get a season ticket or join our membership for the benefits that gives.

Will a 22lb brown trout grace someones net when water starts to cool?