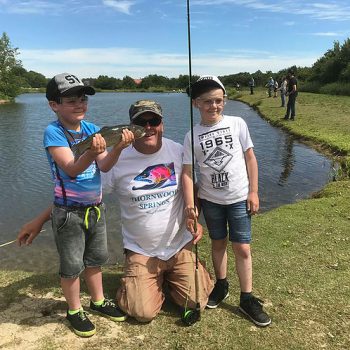 After a very slow start to the day with a small bunch of new fly anglers for our guide Michael to kick off proceedings with, as we had decided to have a morning group session plus an afternoon as there was a lot of interest and we felt the group was too big for the amount of never having done it before youngsters versus how many instructors available to guide people on the art of fly fishing. This morning session produced a few takes and missed fish but no fish landed, but the interest was there and we gained a potential few new guys to the sport who enjoyed their session and vowed to return and try again. 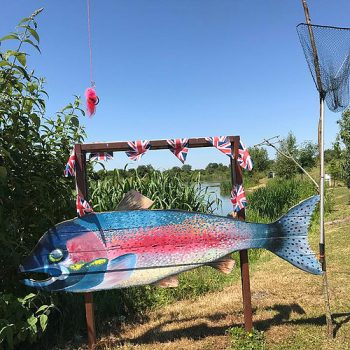 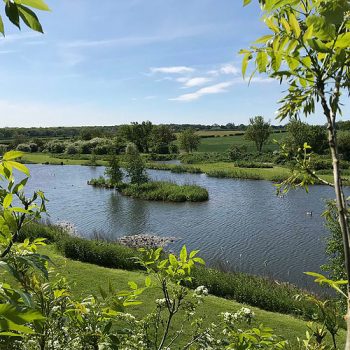 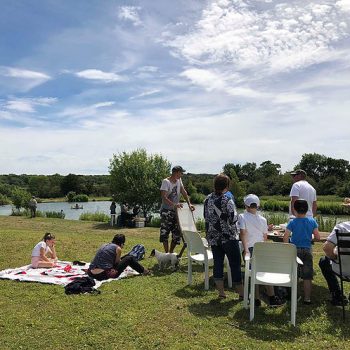 We broke off this session for a fantastic BBQ and refreshments which all enjoyed and the cooking went on all day so hats off to Chris & Herman. After lunch we started casting practice and the instructor group of Darren, John, James and myself split ourselves up in classes of 2 or 3 young pupils each and the day progressed . All talented instructors in their own right and all big fish catchers here constantly but could we get any bites ??!! So we decided to move to the other lake to try our hand at stalking the margins as I knew the Tiger trout would be visible and jumping on the abundance of hatching damsel flies in both blue and green form.

Having all wound in and now situated on the other lake evenly spread out we started to see the patrolling fish which upped the excitement and concentration on the young anglers faces with some trying so hard to get their dry blue damsel in the ring of a rising fish, some fish rose, some looked at it then backed away but was adrenaline filled for those involved will it take it? Won’t it? Heartbeats rose and fell and the fish continued to poke fun at us!! After more than an hour of this I thought I will try another method with 1 of my group and kept Ethan on a damsel who was enjoying the sight fishing the most and put his younger brother Oscar on to an orange blob at 6 feet under an indicator and drifted it 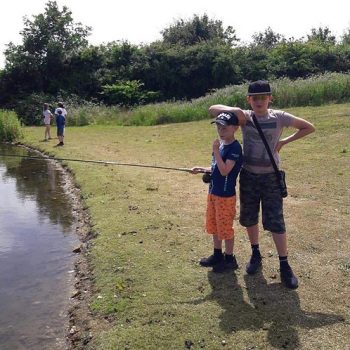 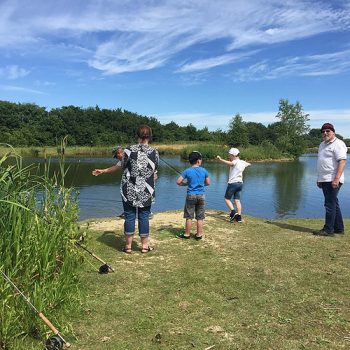 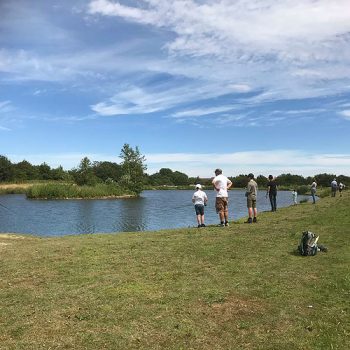 Ten minutes later screams of I’ve got a bite filled the air and Oscar was into his first Trout of the day and after an epic scrap, with long hard powerful and deep runs, it was in the net and posing for photographs with a happy Oscar beaming away as he told everyone he would catch the first fish of the day -the power of positivity! 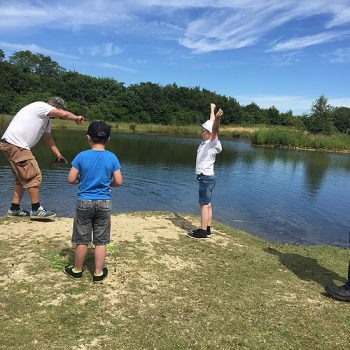 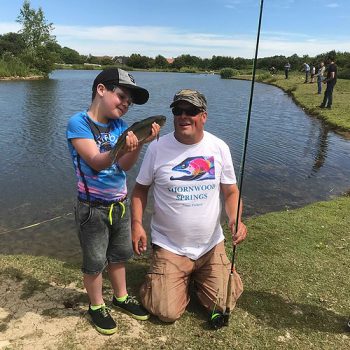 Half an hour later Darren and his group of Daniel and younger brother Alex decided to see if the fish had woken up in the catch and keep end of Three Springs Lake and soon we were all to follow as he started catching regularly with lots of finicky bites -all deep down blobs suspended under indicators.
A quick method change on all rods and soon all groups were catching fish, some youngsters found it hard to keep the fish on once hooked as oxygen is high and fish swam fast catching some of them out time after time! But all caught between 2 and 4 fish each to take home ,a few of the older ones also landed a couple on cats whiskers slow and deep and James Blayney hooked loads while helping his group with 5 year old Iggy and his parents on an intermediate line twitching blobs deep down which really showed where the fish were on this lake today whilst other lake in the margins for all to see -same day different behaviour to see. With John and his group taking longer for the lad to land his first ever fish as he hooked loads but lost them on the pull in while his dad Richard caught quickly. 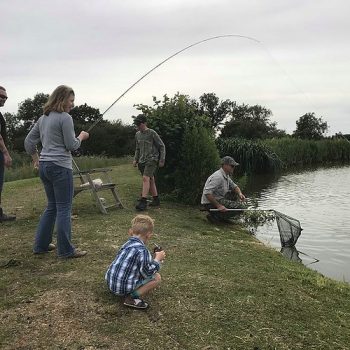 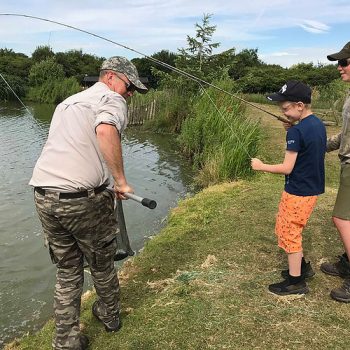 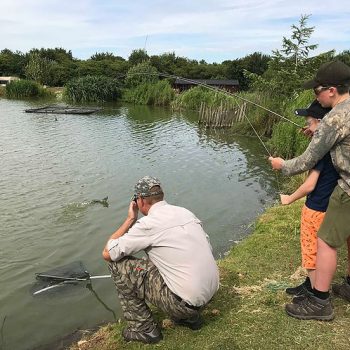 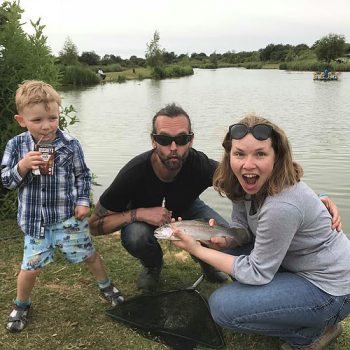 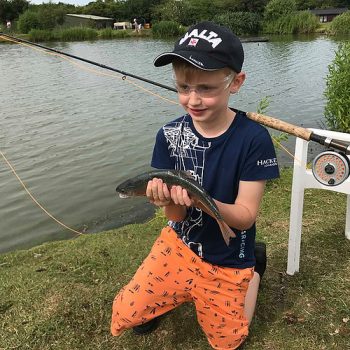 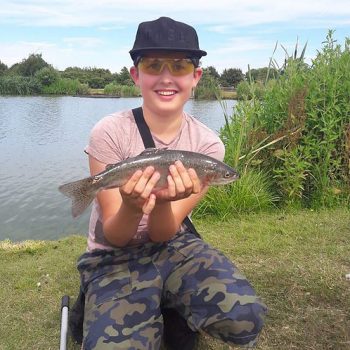 Was so good to see the next generation of anglers having so much fun catching fish ,
learning a bit and asking questions -do fish have eyelids ? One eagerly asked showing the thought and interest on a hot and bright day.

Lets hope some of them take it up properly, I’m sure 50% at least of this group will as both them and parents seemed very enthusiastic and into it and then hopefully get as into it as us, as the sport needs this next generation to take over as it gets dwindling numbers on commercial fly fisheries of today, day by day. How many of you have fished in the last 3 weeks? As fisheries need your regular support to remain viable and open for you to fish. They can’t remain open for you to fish them twice a year each! The amount of summer lookers that come and talk about their old favourite haunt that is now a carp or coarse fishery – USE IT OR LOSE it as the saying goes in the magazines at the moment! 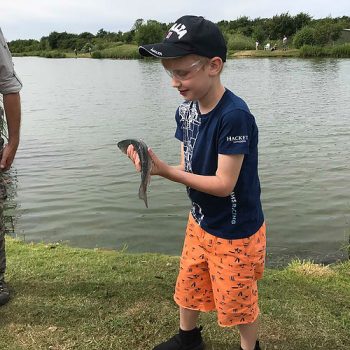 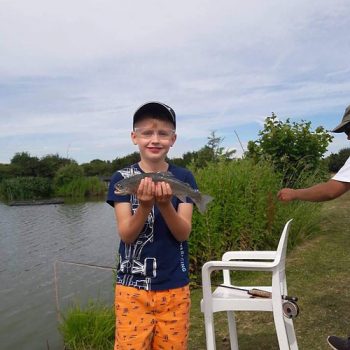 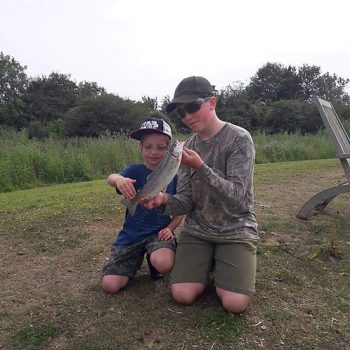 Remember when I designed these lakes they were dug with summer fishing in mind and over wintering of PROPER fish!! As the depths and springs allow cool zones for the fish to go , summer fishing is mainly best early mornings and late afternoons /evenings as Vishaal demonstrated one morning this week when he came for a pre-arranged dawn session resulting in his biggest rainbow to date at just over 5lbs on a dry fly at just after sunrise time -what aperfect start to the day!
Well done him on making the effort to catch a bigger one and fishing early and the week before he fished later one afternoon and into evening. Yes middle of the day can be tricky on bright sunny or balmy weather but 99% of the time they always come on at some point either early or late so for most productive sessions fish the right times for the fish!! But sometimes the fish read another book and can be feeding ravenously for no reason at midday LOL!!

Thanks to all who came both kids and parents for great support hope to see you all on the waters edge soon for more , thanks to all helpers involved and my other half Renalyn for her never ending patience and organising skills she never lets us down!

See we had it tough due to heat and brightness but all youngsters caught a fish or 4, lets hope to see you out fishing soon! 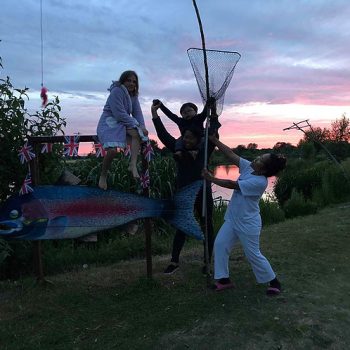 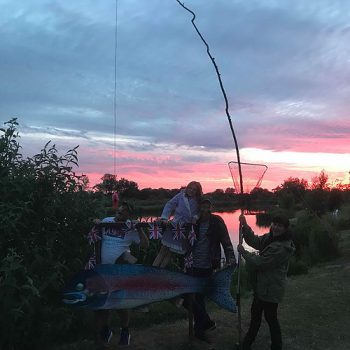 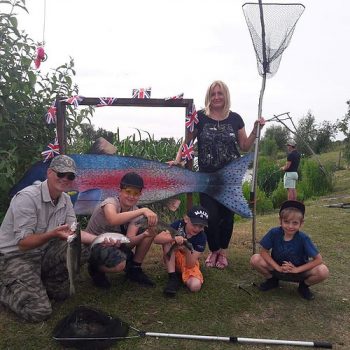 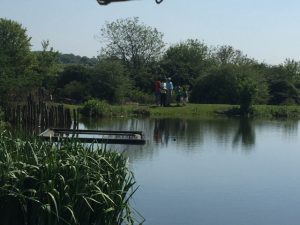